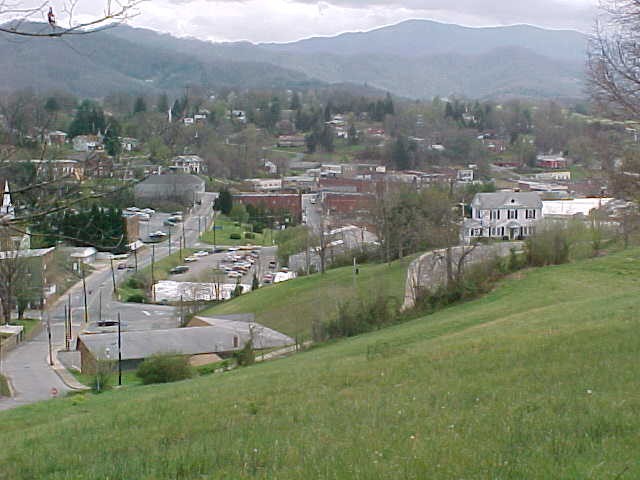 Pisgah High School resides within the small township of Canton North Carolina, which has a population of 4000 people. Canton is set along the banks of the Pigeon River. Canton’s beautiful residential areas consist of tree-lined, quiet streets that almost beg you to stop and spend some time with us. Canton is home to Evergreen Packaging, formerly Champion Paper, which is Haywood County’s largest Industry, employing over 1300 people.

Canton has a wonderful recreation program, which provides many opportunities for residents and guests alike. The Recreation Park has a large swimming pool; playground; picnic tables; tennis courts; and a peaceful walking path, which runs, along the beautiful Pigeon River. Canton is within easy driving distance to many golf courses and some of the best fishing anywhere in the Smoky Mountains.

The History of Pisgah High School
On September 30, 1963, the joint boards of education recommended that the schools of Haywood County consolidate. At that time there existed two educational boards in the county, the Haywood board of Education and the Canton City School Board. In a move designed to promote a better educational environment for the children of Haywood County the two merged as one unit. Due to the popular thought that larger schools could provide more opportunities at a more cost-effective price, plans were made to build two senior high schools, one on each side of the county. The construction of these new schools was to be financed by a 2.5 million-dollar bond, along with additional state and local funds. In 1964, thirty acres were purchased from the W.J. Smathers estate for $2,500 per acre as the site of the new Pisgah High School. In January of 1965, the editors of the local papers, the Mountaineer and the Enterprise, along with the managers of two radio stations and Mr. Curtis Russ were chosen to recommend names for the new school. The committee requested public input, and on February 9th, 1966 the name of Pisgah High School was selected at approximately two a.m. by the joint board of education. Mr. Jerome Melton was elected the first superintendent of the Haywood County School system.

On August 29, 1966, Pisgah Senior High School opened its doors for the first time with Mr. B.F. Maree as its first principal. Pisgah High School replaced Canton, Reynolds, Bethel, and Clyde High Schools. The first student enrollment was figured at nine hundred and seventy four students. There were forty-nine teachers, five teacher’s aids, one guidance counselor, eleven vocational teachers, one driver’s education teacher, and one special education teacher. Due to an unusually heavy rain the night before the new school was to open, and without the construction of sidewalks completed teachers were prompted to take their shoes off as they entered the new building.

The school held twenty-seven classrooms and six science labs. Seventy-four courses were offered and teachers were paid a salary ranging from $3600 to $6200 a year. In 1967 and 1968 Pisgah High School Library was chosen as a demonstration library as it held one of the few super 8mm film strip projectors in the nation. The Naval ROTC program became a part of the curriculum in 1970.

In 1967 Pisgah High School was accredited by the Southern Association of Colleges and Schools and to this day maintains its high academic standards as well as its accreditation status.

During the spring of 2002, Pisgah High School underwent its five-year review for the Southern Association of Colleges and Schools (SACS). Pisgah received high marks on all five areas of the review process (School Climate, Planning, Staff Development, Curriculum and Instruction, and Communication), and noted no deficiencies within the school. Among their written remarks following the process the SACS review committee had the following to say of Pisgah High School:

“There is a real sense of community at Pisgah High School. The teachers report that they are very happy working here and feel that they are definitely supported by the administration. Students love the school and state that there is something here for everyone. People are friendly and accepting of one another. Often the parents, students, and administrators referred to the program opportunities and strong community atmosphere in this school.”